Ala Chocha in 1086 was Cock Marling, Udimore, East Sussex

A place named Ala Chocha is recorded in a notification of plea of William the Conqueror in 1086 as a manor of William of Eu.  There is no place with this name in any other English or Norman record.

In February I correctly identified Ala Chocha as a manor on the Udimore ridge, but the etymology wasn't entirely satisfactory, so I have kept looking.   Last weekend I realised the relevance of the Rye Camber salt pans after visiting Maldon on Saturday and reading every reference to salt in Anglo-Saxon charters on Sunday.  Now I can confirm that Cock Marling comes from Coquenaria Marliensis - the salt pans of marling.

The Brede Basin was an industrial powerhouse and strategic asset 929 years ago.  William the Conqueror and his entourage would have looked from the manor at Ala Chocha across the Channel to Normandy, overlooked the harbour where ships moored in the port of Winchelsea, viewed south to the markets of Old Hastingas across the ford at low tide, viewed north to the London road from Appledore.  The Brede Basin hosted ship building, iron mining, potteries, bloomeries, forges and saltworks.  The site presented an ideal spot for a prestigious manor for a warrior with the stature of William d'Eu. 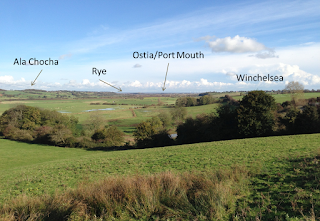 Ala Chocha was named for the the greatest coastal saltworks in all of Britain: the 100 salt pans attributed to Rye in the Domesday Book and probably the additional untaxed salt pans of Rameslege nearby.  Fecamp Abbey's Rameslege domain is mostly omitted in Domesday records as free of the king's taxes, but the settlements at Rye and Novus Portus are both detailed.  1,195 salt pans - salinae - are mentioned in Domesday Book, but 100 is the most in any one place.  The next nearest in production is Maldon with 45 salt pans.  Cheshire has its -wiches with varying levels of production.  (Virtually all -wich names were associated with salt production.)  The rest were only of local importance. 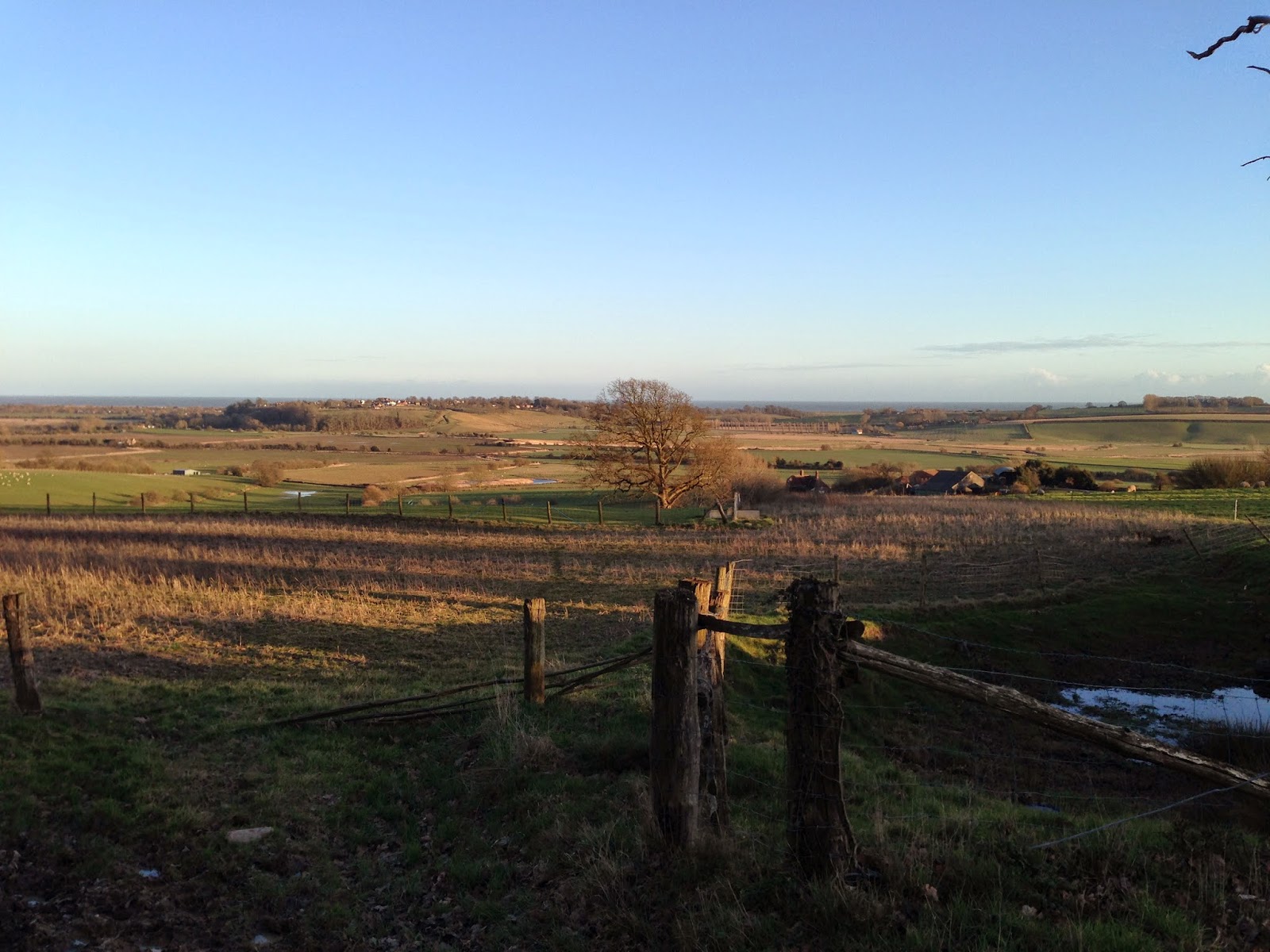 Salt was the original money, traded for centuries before coinage was minted.  Roman soldiers were paid in salt, hence the word soldier is one who works for salt, and a salary is a regular entitlement to salt.  Salt was really good money: portable, negotiable, storable, stable, essential.  Having started my career as a central banker, I find a monetary basis for the name Ala Chocha elegant and satisfying.

Three Anglo-Saxon charters use near cognates of Chocha in reference to salt cookers.  In 785 King Offa uses coquendam sal.  In 863  King Aethelberht of Wessex and Kent uses the term salis coquinariam.  In 938 King Aethelstan gives land at Taunton with coquindam salis.  Chocha and coquinaria are pretty close cognates, and much more satisfactory as an explanation for the Norman name.  Ala Chocha simply means 'Wing of Salt Cookers' and the ridge from Udimore (Eu de mare means the manor of Eu by the sea) through Cock Marling leads straight to the then enisled market town of Rye at the tip of the wing.  The map in the banner illustrates the shape of a wing nicely.

Rome insisted on imperial control of large-scale salt production, and early kings took royal control and taxation of salt production when they took power.  Salt was historically subject to heavy tax, usually equal to the sale price.  The tax and price could be sustainted as salt was essential to food preservation, industrial processes and urbanisation.  Fish, meat, cheese and vegetables can only be preserved effectively with salt.  Leather must be cured with salt.  Dyes need salt to work their colour into fabrics and leather.

The Anglo-Saxon references support coquinaria as the basis for Chocha and later Cock.  The Brede Basin had the woods for cooking the salt, the iron ore to make metal salt pans (which wore out fairly quickly), markets and fishing fleets for ready sale of the salt, and mints for exchanging salt into gold and silver for payments to the king and church.  Geographically the Udimore ridge had the right slope to fill sandy salt pools at spring high tides, and concentrate the pools with successive inflows and evaporation to saturate the sands.  The Romans and then the Normans would have brought superior industrialised processes and technologies with them in developing the Brede Basin to make it highly efficient and productive as an industrial and commercial centre.

It is a phase in manufacture of salt that gives us Marling.  The salty sands from salt pools on the tidal flats were carried in baskets to salt works above the pools where the salt was rinsed from the saturated sands with fresh water.  The sand was allowed to settle and the brine was drawn off for cooking.  Other impurities were precipitated from the brine solution using a variety of methods, such as adding egg whites to create a froth that captured impurities.  That frothy mix was - and still is - called marl for the fine clay that often adulterates salt brine.  Then the brine is boiled away to leave the pure salt.  In Latin or Romanz (the Norman language) the genitive plural would be marliensis.  The descriptive name was Anglicised like most -iensis place names to an -ing ending in English.  The name Cock Marling is therefore a modern expression of coquenaria marliensis - the salt pans of Marling.

The Udimore ridge, Guestling ridge and Iham (now Winchelsea) had plentiful fresh water.  Rye didn't have much fresh water according to records of the medieval town, so Rye probably made its salt at Cock Marling on the ridge that leads to Rye, also closer to the forests of the Anderida Weald.  The Udimore ridge would be preferred for salt-making because it was south facing, so received more direct sunlight to promote evaporation of the brine pools below the ridge.  In the steep valley the brine pools were also sheltered from winds in the Channel.

The many bloomeries along the ridge for making charcoal for iron forges probably served the dual purpose of evenly evaporating salt brine.  Charcoal-making requires steady, moderate heat - like salt pans.  Charcoal requires huge supplies of oak, supplied by the forest of Anderida Weald, convenient for ship building in the Brede Basin.  The Anglo-Saxon charters for coquenaria also grant rights to wood from forests with the grants of salinae.  Charcoal was essential to the steel forges that made ship chandlery, tools and weapons in the Brede Basin, but charcoal does not transport well so needs to be produced locally, close to forges.  The four industries of timber, iron works, salt production and ship-building were all locally synergistic, and all important to the projection of royal power.

The manor of Count d'Eu was "above the salt" - literally and figuratively - if it was located at Udimore near the church built by Fecamp Abbey.  Udimore is just west along the ridge and a bit higher than Cock Marling.  The name itself can be derived as Eu-de-mer: Eu's manor at the sea.

According to "Rother Country", page 108, which is written by local historian Bob Chantler:

Court Lodge seems to have been an important residence from an early time.  It was visited by both King Edward I, who reigned 1272 until 1307, and by his grandson Edward III, whose queen, Phillippa of Hainault, watched the Battle of Les Espagnols sur Mer in the English Channel from the manor estate.  Later on August 15th 1479, a royal license to crenellate was granted, and Court Lodge became a fortified manor house.

The detail about watching a sea battle on 29th August 1350 (also known as the Battle of Winchelsea) from the house seems to support its excellent defensive position monitoring both the estuarine port and the Channel crossing to Normandy.  Bob includes some pictures of the moat and Channel view, if you follow the link.

The 13c Court Lodge was moved in 1912 to Groombridge, but may have been built on an earlier Romano-Gallic-Norman foundation at Udimore.  I've been told by locals that there are deep slag foundations at buildings and farms above the valley that may indicate early Romano-Gallic buildings for the port infrastructure and industrialisation, pre-dating Fecamp Abbey possession from 1017, or even Saint-Denis possession from 875 (perhaps further evidence for the genuineness of the Saint-Denis charters).  This is one of the things I will continue to investigate.

Court Manor gardens are open to the public during the summer, so I may visit next time I'm down in Sussex.
http://www.castleuk.net/castle_lists_south/188/groombridge.html

If I am right about this identification, it also supports the name Senlac - sandy loch - as applying to Brede Basin.  We know from modern geologic core samples that the basin was covered in deep marine sand, but sand's essential relevance to salt processing is confirmatory.  With massive industrialised salt works the sands of the valley would have gleamed white below the English battle line on the ridge facing the Norman camp in October 1066.  Sandy Loch would be an obvious name for hinterland Saxons to give the great, prosperous estuarine port.

It also makes sense that Anglo-Danes Godwin and Harold would have contested control of such an important and profitable industrial basin held by Anglo-Normans.  Godwin may have tried to take Bredta, the manor holding the Udimore ridge, early on when he gained his earldom, while Cnut was king.  Fecamp Abbey won an undated confirmatory charter from King Cnut for the manor of Bretda as being properly part of its possession named Rameslege.  The charter also grants 2/3 of the portoria tolls at Winchelse to the abbey, with presumably 1/3 for King Cnut.  That charter was confirmed later by Harthacnut as king.

When the weaker Saxon-Norman Edward the Confessor was king, the Anglo-Dane Godwin once again coveted the great and profitable saltworks.  After 45 years of Danish rule in England, Edward the Confessor was surrounded by Danish earls.  The hauscarls (paid soldiers) and butsecarls (shipmen) were Danes or Anglo-Danes, and the Saxons had grown accustomed to Danish rule.  The Norman-bred king had little real power to contest against Anglo-Danish violence.

Godwin and his sons violently seized the Brede Basin from Fecamp Abbey in 1052 during the rebellion while they were outlawed, killing, enslaving or exiling the Anglo-Norman population of the basin.  Abbot John sought return of the abbey's possessions in 1054 after Godwin died, but Harold refused as successor to his father's earldom.  1066 was payback, with King Harold losing the Brede Basin and the kingdom to Duke William.  By 1086 the salt industry in the Brede Basin was clearly in full swing again.  The naming of the manor Ala Chocha gives further confirmation of the importance of salt to medieval prosperity.