I've added a biggish insight to the footnotes of the Carmen: the suggestion that the Normans were following the same plan of attack as Caesar recorded in his Commentaries on the Gallic Wars and the Romans and Normans likely used the same port for the invasion fleets.

At line 32 of the Carmen William is described as "another Caesar" so clearly Caesar was a popular role model. The Commentaries on the Gallic Wars were widely copied in antiquity as a great read.  They were a first century best seller.  They offered a wealth of detail on military strategy, politics and civic administration.  Reading the Commentaries was like getting a medieval MBA.

The port for the invasion and the timing of the attack were critical choices for both commanders.  Wanting to reduce risks, William might well copy Caesar.

Tides vary seasonally, with the highest tides of the year corresponding with the full moons around the time of the equinox.  September, nearing the autumnal equinox, would bring the highest tides while still being warm enough for a military campaign.  You might go in on the September flood and return on the October flood, giving you a month of raiding.

It is worth remembering that the Normans were just a few generations descended from Vikings, and expert at coastal raiding and navigation.  The name Viking comes from the practice of raiding up estuarine waterways using the flood of the tide to get in and the ebb of the tide to get out.  Vics or wicks were estuarine river mouths.  Place names ending in -vic or -wick were port settlements.  The seasons for coastal raiding were the spring and the fall, coinciding with the strongest tides.

According to the Commentaries, Caesar launched his fleet in 55bc at the end of the summer a few days before the full moon, probably 16th or 17th September.  The full moon occurred on September 20th at 20:57.  That was three days before lunar perigee and about 3.5 weeks before the equinox, all key tidal factors. The unexpected violence of tidal surge in the port the night of the full moon caused massive damage to Caesar's ships, stranding him and his troops while the the ships were repaired.

William launched his fleet from Dives-sur-Mer just after the full moon of 6th September in 1066, probably not wanting to repeat Caesar's mistake, and being much more clued up on tides.  Adverse wind kept the Normans embayed until 12th September, when they used a western wind to reach St Valery-sur-Somme.  They were kept there by unrelenting rain and storms until 26th September, when the skies cleared, the weather became unseasonably warm, and the wind shifted to the ideal southeast wind suiting the Channel crossing.

Whether it was coordinated or not, Harald Hardrata's fleet seems to have launched for the north of England to join forces with Tostig Godwinson using the high tides just after the September full moon too.  They arrived in the north of England on 8th September, giving them a span of successful raiding before Harold's army came north and defeated them on 25th September at Stamford Bridge.

Tostig Godwinson was married to the sister of Baldwin V, Count of Flanders.  She was the aunt of William's wife Matilda, Baldwin's daughter.  When Tostig was exiled by his brother, Harold of Wessex, in 1065 he fled to Flanders, then travelled to Normandy to treat with William.  Tostig's raids in the spring of 1066 on the south coast of England were with the aid of a Flanders fleet, just as his father Godwin's raids had been in 1052.  Tostig later goes to Norway to engage Harald Hardrata's support for invasion.  The idea that Tostig and William were in cahoots isn't very far fetched.  The timing of sailing of the two fleets from Norway and Normandy in September seems to support it. The Carmen expresses great sadness that it is Tostig who dies rather than Harold at line 136.

Caesar made a night crossing in 55 bc, reaching the shingle off the English coast in the fourth hour and allowing his fleet to form up and anchor until the 9th hour.  William also makes a night crossing of the Channel and anchored when he reached the shingle off the English coast to allow the fleet to form up.  He probably anchored near Old Winchelsea, where he landed again in 1067.  At line 116 the Carmen says, "On the open sea you moor offshore."  Both of them waited for the fleet to join up and rested their men, waiting for light and the turn of the tide before entering the long estuarine harbour.  They would want to benefit from every minute of flooding tide to ensure that the water would continue to rise under the heavily laden ships as they navigated the channel.  With a rising tide they could be sure of being lifted free if grounded and would be safer from defenders on the shore.

In the Commentaries (IV:23) Caesar describes the harbour as having steep ridges close either side which were lined with defenders.  A bladed weapon thrown from the heights would hit the strand below.  This accords exactly with the approach into the Brede Valley - then a tidal loch navigable all the way to Sedlescombe.  The mouth (ostium) was braced by Rye to the north and Iham to the south.  There were steep cliffs at Iham and across on the Udimore ridge.

By 1066 the sandy loch was the harbour for Hastingas, the name of the region around the port.  The town was called Hastingecastre or Hastinge villa.  The 12th century De Viis Maris, a guide to coastal navigation, says that Hastinge villa had a castle and town but no port.  It says the port of Hastings was at Winchelsea, seven miles distant.  That's a pretty clear statement.

Tradition has the landing in 1066 at Pevensey, but there was no port of the name on the coast in 1067.  De Viis Maris names Penresse as the next fort and port eight miles to the west of Hastings, and Penenesse as the next headland.  Pen means enclosure or basin, so covers both fort and port in Saxon.  Ras means headland from Iceland to India, but vasse (pronounced wash) means swamp or saltmarsh in Frankish and Saxon.  The Normans always wrote the name as Penevesse - port in the wash - more clearly meaning port in the swamp.

The saltmarsh extended so deep inland that the Roman road goes far north, almost to the Thames, before offering a crossing to the east.  If Hastings was where William wanted to be, he would have been stupid to believe he could land at Pevensey and march his army around to Hastings as some believe.  He wasn't stupid.

Caesar says that he took advantage of wind and tide to sail a further eight miles inland at the port.  The Carmen says that the Normans proceeded three hours from the leaving the sea behind before landing.  That's about the same distance probably.

The Bayeux Tapestry shows the boats being poled to the landing place and the masts being struck down.  This is consistent with an estuarine landing place, not a seaport.  Horses are led from the ships onto the firm strand without ramps.  Harold's landing in Normandy in 1064, by contrast, shows erect masts and massive anchors, as one would expect in a seaport.  When the Normans raid Hastingas the boats in the Bayeux Tapestry are detailed in a row on the beach with open oar ports.  This is consistent with rowing on the tides for local coastal raiding of the Rye Camber region.  The attack on Romney when the local boatmen defeated the Normans was probably an unsuccessful raiding party, not stragglers who missed the main landing.  Tenderden, also raided, could be accessed via the estuarine channels. 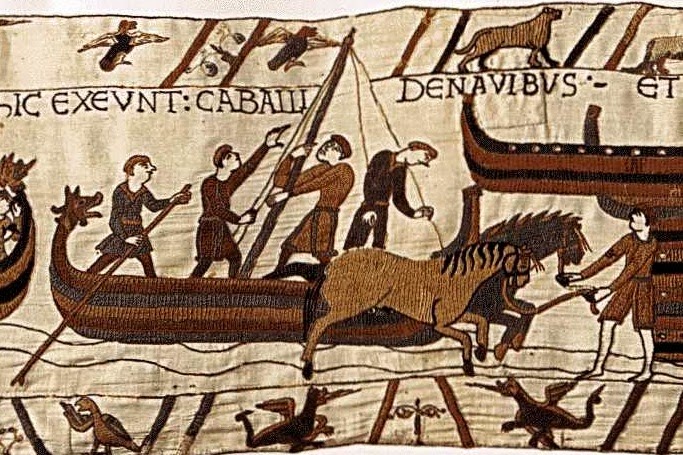 Caesar's ships beach on an open and level shore eight miles from the sea (aperto ac plano littore), likely beyond Brede on the south side of the large, sandy port.  The Normans beach on a sheltered strand (littora tuta at line 124), also described as a pleasant, calm arc of strand (laeta sinu placido at line 128).  Both fleets seem to have landed in a very similar place.

Whether or not William the Conqueror was "another Caesar" he may have followed Julius Caesar's template for invasion of England.

A Brede Valley landing might not just be a discovery about the Normans, it might also prove to be a discovery about the Romans.  Historians have tended to place Caesar's landing in Thanet or Deal even though neither place offers a port eight miles deep or has high cliffs close on either side or would be subject to violent tidal surge.  Historians also put the Norman landing on a remote spur of land in a swamp with no roads through the salt marsh to Hastings.  Perhaps they lacked our ability to see geography through time and only saw a pastoral valley between Sedlescombe and Winchelsea and a passable coast road between modern Pevensey and Hastings.  In offering the Brede Valley for the Norman Conquest I may have also solved the mystery of where Caesar landed over a thousand years earlier.