Hastings may be a name derived from Ostia or Hostis, and sensibly have described the Roman port in Britainnia for control of trade between the province and Gaul opposite its mouth.  If so, the map below may be an accurate depiction of the great port which existed from Roman times until shifting shingle closed it to the sea in the 13th century, creating the pastoral Brede Valley. 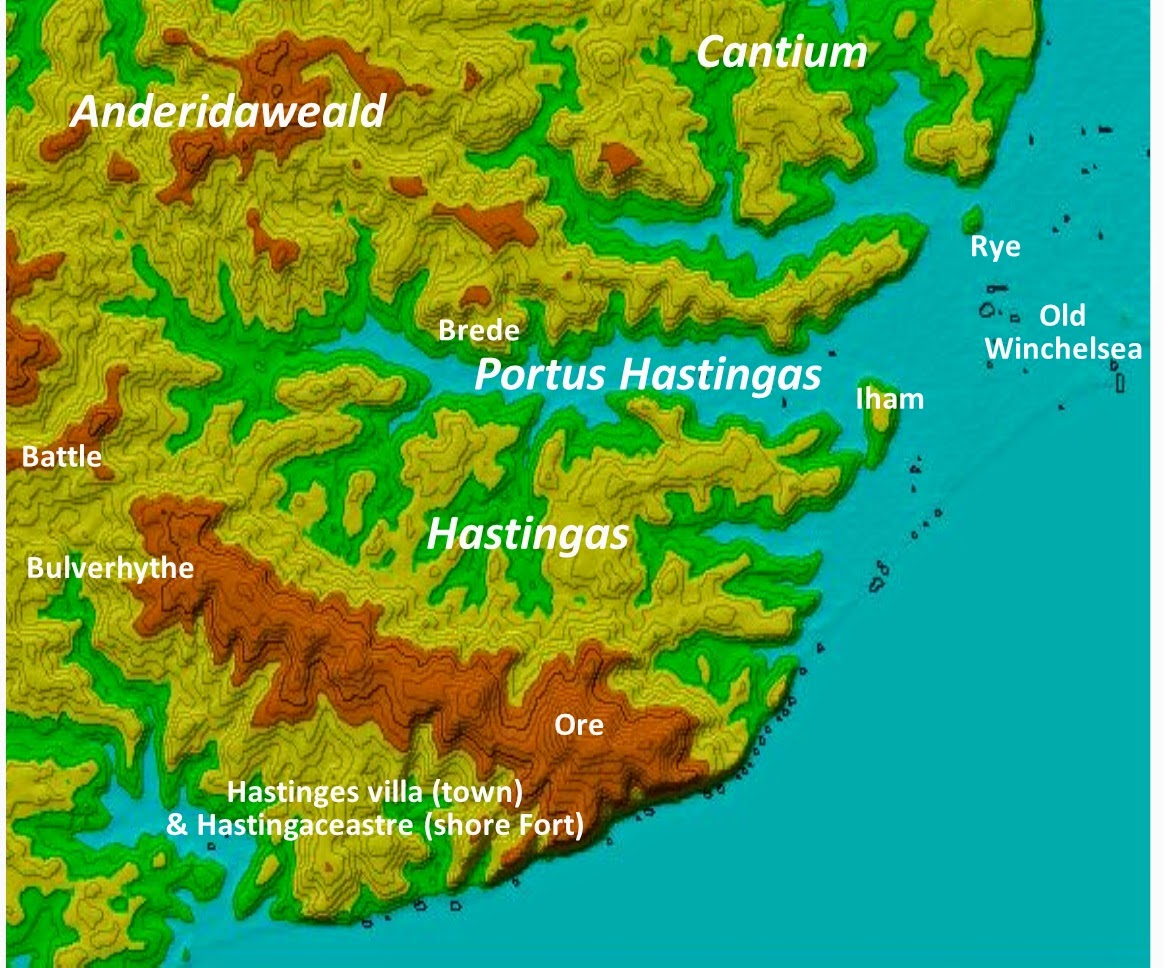 I've always been dissatisfied with the common belief that Hastings was named for an undocumented and suppositional tribal leader named Haesta.  While the Anglo-Saxon Chronicle does name Hastens as the leader of a fleet of 80 ships that come up the Thames in AD 893, with 250 more ships coming up the Limne, this is long after the region to the south was named Hastingas.

The documented Hastens (or Haustuin, Hastingus, Alstingus, Alstagnus, Hastencus or Haustem) was a Viking (using the term in its functional sense of describing those who raid up estuaries or wicks) from Normandy.  He appears to have raided both sides of the Channel from Paris to London.  He must have been a respected and established Christian chieftain in the 9th century as the Anglo-Saxon Chronicle says his two sons are godsons to King Alfred and Alderman Ethered.  For this cause his captured wife and sons are returned to him in AD 894 by King Alfred.  A young Rollo, the first duke of Normandy at its founding in 911, might have been a captain in the Hastens fleet as Wace says in the Roman de Rou (the story of Rollo) that he raided Britain in his youth.

It is possible that Hastens, like the Dread Pirate Roberts, was a name taken by whoever led the hoards of Frankish-Danish pirates ransacking the Saxon Shore, but there's nothing but guesswork to support such an idea.

The earliest records of Hastings as a region are Saxon royal charters of Behrtwald, Offa, Aedelwulf and Edgar in Latin benefitting the abbey of St Denis.  These four charters of the 8th, 9th and 10th centuries reference portus Hastingas. The tenth century law code of Aethelstan in Old English names the defended capital of the region as Hastingacaestra.  Coins issued by King Cnut and King Harold bear the name of the mint as Hastinga a century later.

The fact that the royal charters were written in Latin rather than Old English has led some to suspect their authenticity, but this criticism is weak.  Royal charters were often drafted by those benefitting.  St Denis, the most powerful church in Frankish Gaul, was a religious order in the Apostolic See of Rome directly subject to the authority of the pope.  It was based in Paris, the Frankish capital, and controlled markets and trade into Paris from the Port de Paris where the abbey had its grandest edifice.  Any prelate from St Denis would draft a charter in Latin using Carolingian form.  A charter to St Denis as an alien abbey to secure closer alliance and protection from both Frankish Gaul and Rome would naturally be written in Latin.  Also, Mercian kings like Behrtwald and Offa were very closely connected by trade, marriage and Frankish tribal identify to the Frankish tribes opposite their domains in Gaul.  Offa's wife Cynethreth may have been of royal Frankish birth and kinswoman of Charlemagne.  King Offa preferred Latin for correspondence with Charlemagne and the pope in his regular correspondence with them.

In the twelfth century Symeon of Durham offers another clue as to the history of the Hastings region.  He refers to the Hastingorum gens - the people belonging to the Hastings region - as conquered by King Offa in AD 771.  All other battles name kings and leaders who have been defeated in battle, but in Hastings it is the people of the region that are assimilated to Offa's kingdom.  Hastingorum, like Anglorum or Normannorum, describes the people of a region.  This unique usage for Offa's success in uniting Hastings to England led me to think the Hastings region may have lacked a king and been ruled as a republic of its citizens, like other ancient Roman ports founded as colonies of Rome - including the port of London.

If so, Hastings might be a corruption of the name of the port.  The earliest Roman port was Ostia, the port of Rome itself, 30 miles distant from the capital.  Ostia is from the word os for mouth.  It geographically describes an opening to the sea created by a tidal estuary. The region of Ostia, embracing the port to the west of the estuary and the fortified town to right, was a colony of Rome, self-governed as a republic of its colonists from its founding in the earliest days of the Roman Republic.  The colonists were exempt poll tax (tributa) and also exempt military service away from Ostia, as their munera (civic obligations) as colonists were to fund the building of fortifications, port infrastructure and markets and defend the port against attack.

A few weeks ago I found further evidence that Ostia might be the basis for the name Hastings in looking at the fourth century Tabula Peutingeriana.  The name of the fortified town across the estuary from Portus, the massive defended port of Rome, is written as Hostis on the map, and the road to the port from Rome is the Via Hostensis.  A similar cognate could well be the name for the Roman port in the south of England.  An English corruption at the far western end of the Roman Empire might be Hastes, and those belonging to the port colony would be Hastingorum and the way there Hastiensis.

Hastings may also be a corruption of Hostis, if the ports were given the same name.   Hostis in later times usually meant the enemy in a battle, but in earlier times it just mean foreigner.  The port town may have been the limit of entry of foreigners transiting the port or merchant seamen trading in the port.  Support for this around Hastings in Sussex might be derived from the names of places like Rye Foreign and ancient texts which describe the jurisdictions of the ecclesiastical-controlled port and the king's lands as quite separate, with England being 'foreign' to the lands and barons (boatmen and burgesses) of the port. 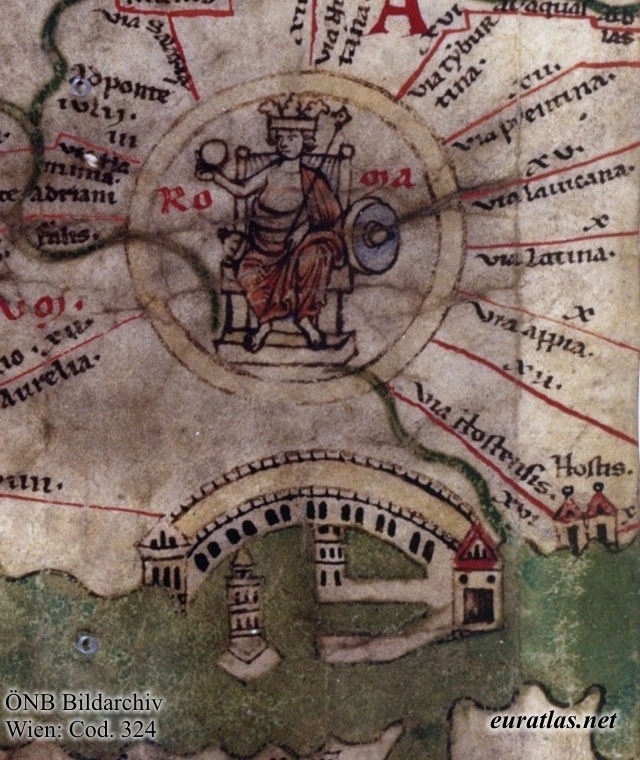 We know from the twelfth century De Viis Maris that the port of Hastings was at Winchelsea, eight miles from the shore fort and town.  The approach to the port was bounded by the cliffs of the Udimore ridge to the north and the Guestling ridge to the south, creating a natural os or mouth.  Either Ostia or Hostia would be a sensibly descriptive name for a port situated in such a place between two peninsulas and kept at arms length from inland England.

Interestingly, portus did not always mean port.  Its original meaning was door or gate, and it implied both an opportunity for entry and a vulnerability to attack.  The Roman god Portunus was the god of keys and locks, protecting doors from forced entry, and later the god to protect harbours from foreign attack.  He was also a god of fortune - good and bad.  Opportunity and fortune are both cognates of portus.  The Gates of Portunus in Rome were open when Rome was at war defending its territory and imperial privilege of tribute and taxes and closed when all of the Roman Empire was at peace (not very often or for very long).

It is through usage that portus takes on the nautical meaning of seaport.  The Roman Empire restricted trade and travel between its provinces and between the Empire and foreign domains to those ports where the Roman senate during the republic and later Roman emperors had established fortifications and authorities for collection of ship taxes (portoria) customs duties (vectigalia).  Roman ports were typically enisled either by nature, as islands or peninsulas, or through manmade canals around the fortified port (as at Portus in Ostia and the canalised ancient London in Britannia).  Sailors, pilgrims and visitors were given freedom of the port and protected during their stay.  They were not allowed entry to the country beyond the port unless they held a document authorising them to pass through the port gate to the road leading inland - a passport.  This formality ensured that those passing through or trading in a port could not gain local intelligence or mix with local tribes or treat with local leaders, promoting the security of Roman control over their extensive domains.

The Roman Empire's fleet for patrolling the Saxon Shore, the Classis Britannia, had its base in the estuarine Rye Camber and directly administered the iron mines, forestry, bloomeries and forges of the Weald region of the Brede Valley as a centre for shipbuilding and armament.  It would make sense that they would call the region which opened with two peninsular arms to the sea Ostia or Hostis or Hastis for the same reasons a similar estuarine opening and port was given the name near Rome centuries earlier.

Reinforcing the theory that Hastings may be a cognate of ostia is the Roman infantry rank of Hastati, usually the poorest and youngest soldiers and often ill-equipped.  The hasta was the most basic infantry spear given to auxilliaries for local protection.  The Hastati were the first battle line in early Roman battle formations.  They would lead the initial attack but then allow their line to be penetrated by the enemy, drawing the enemy in where the enemy ranks would confront and be surrounded by the hardened, seasoned and better equipped professional Roman troops.  Of course, hasta also came to connote all the authority of Rome, such that contracts between the Roman senate and publicani syndicates were made under a spear (sub hasta) and a planted spear was used to convene an assembly for official business or legal judgement.  This usage too would make Hastia a suitable name for a Frankish-colonised port for Roman administration and taxation of the province Britannia and its trade with the empire.

Altogether the theory that Hastings evolved from ostia or hostia is much more satisfying and appears better evidenced than the unsupported illusion of a leader named Haesta.