Two weeks ago I was in the St George's Church at Brede, East Sussex, originally constructed by Normans from Fecamp Abbey, and opened the hymn book randomly.  The hymn revealed might have been equally popular in 1066 as when it was penned in 1895.  It is not unusual in extolling the militancy of the Christian church of the Victorian era, when Britain sought and achieved global military dominance and justified its oppressions as God's divine destiny to bring enlightenment and civilisation to the 'darker' corners of the world.  These hymns would have been sung among soldiers to instill a mindless drive to conquest, and among colonists abroad and parishioners at home to encourage support of foreign military adventures.  Poetry and song are still used today throughout the world to bind soldiers to strive in battle and publics to support them in aggression. 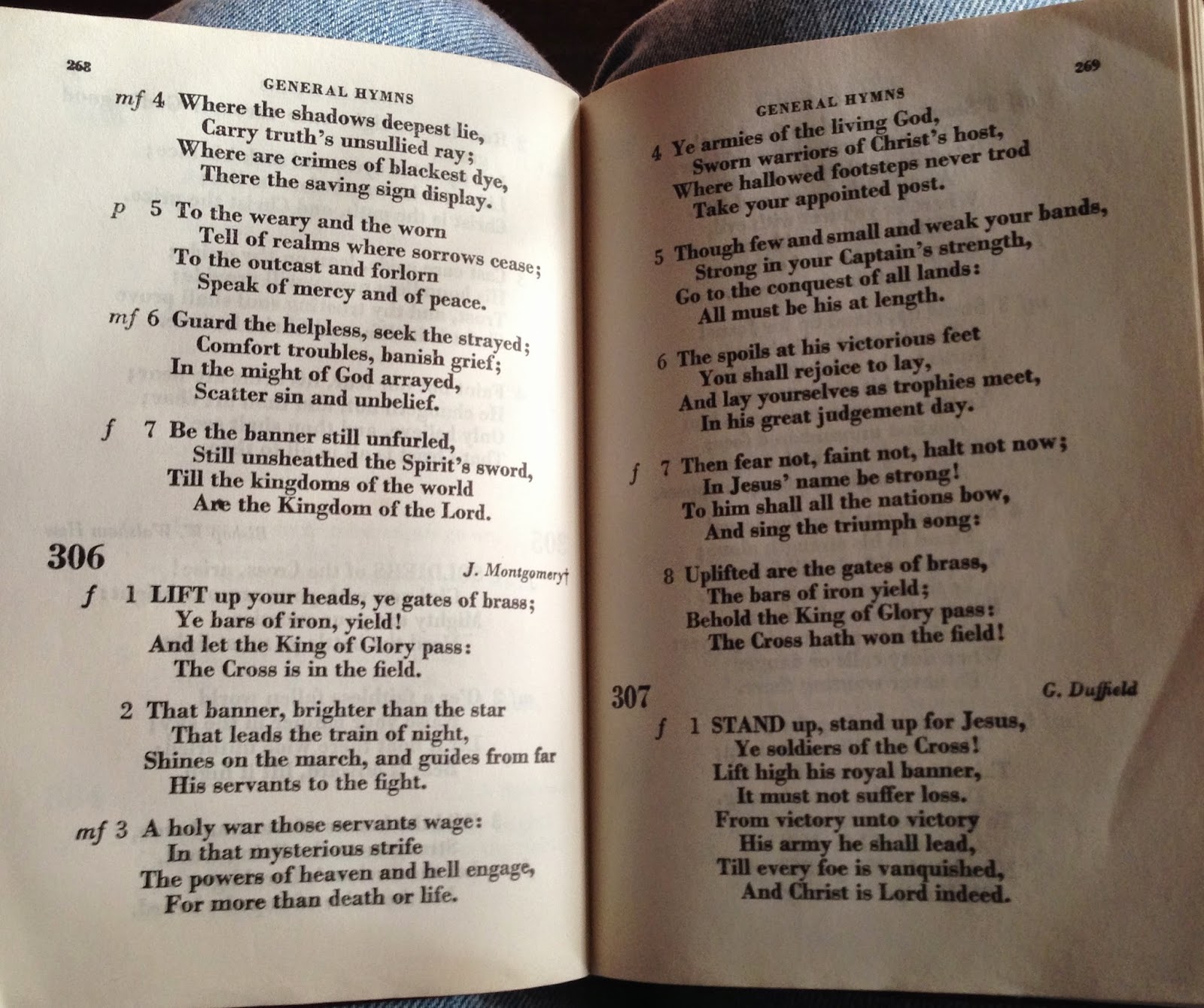 Lift up your heads, ye gates of brass,
ye bars of iron, yield,
and let the King of Glory pass;
the cross is in the field.

That banner, brighter than the star
that leads the train of night,
shines on their march, and guides from far
his servants to the fight.

A holy war those servants wage;
in that mysterious strife,
the powers of heaven and hell engage
for more than death or life.

Though few and small and weak your bands,
strong in your Captain's strength
go to the conquest of all lands;
all must be his at length.

The spoils at his victorious feet
you shall rejoice to lay,
and lay yourselves, as trophies meet,
in his great judgment day.

Then fear not, faint not, halt not now;
quit you like men, be strong!
to Christ shall all the nations bow,
and sing with you this song.

Uplifted are the gates of brass,
the bars of iron yield;
behold the King of Glory pass;
the cross hath won the field!

The church at Brede is decorated with many symbols of battle and militancy.  There are viking-style warships, shields with coats of arms, spears and swords - all in service to the cross.

The Norman allied fleet and army in 1066, bringing with them the banner and edict of Pope Alexander II, would have sung inspirational songs, extolling their destiny to bring England back from heresy into the Catholic fold.  The slaughter of traitors settled at the landing site on lands stolen from Fecamp Abbey and later death in the Battle of Hastings of the oath-breaking, excommunicate heretic King Harold and slaughter of his nobles were sanctified by the higher purpose of religion and serving as instruments of God's will.  When the victorious King William and many of his allied nobles returned to celebrate the conquest at Fecamp Abbey at Easter 1067, they were celebrated for reuniting Britain with Europe in Christianity under the rule of Rome.  The Ermenfrid Penititential Ordinance of 1070 provides penances to be observed by the Norman victors for sins committed in the three phases of the conquest (battle, pre-coronation, and post-coronation), generally enriching and re-establishing the reach of the Roman church.

The main business of King William throughout his reign was to restore Rome's dominance over the Church of England and return to the Church of England and the Holy See lands dispossessed by Godwin and other Anglo-Danes in the decades before the conquest.  King William also gathered and remitted to Rome the vast sum of money that Godwin and Harold had withheld after their successful rebellion against Edward the Confessor and reinstatement as earls in 1052, when they separated the Church of England from the Catholic authority of Rome by installing the Anglo-Dane Stigand, bishop of Winchester, as archbishop of Canterbury.  It was probably because they stole so much from the church that Godwin and Stigand became the wealthiest men in England.

The Carmen itself is a song that celebrates the use of military force in the service of God.  Poems and songs have the power to lift the mind and bind the heart to higher purpose, then and now.

Lines 16 - 20 of the Carmen's Proem make clear that the purpose of the Carmen is to instruct and inspire as well as to celebrate the conquest throughout the Christian world:


The Carmen recounts the antics of Taillefer the Sword Juggler (lines 391 - 407) who sings a song that mocks the English and praises the Catholic allies before the main battle engages.  In societies with low literacy, poems and songs are the most powerful way to create a shared history, culture and ethic.

The singing of the Laudes Regiae, the acclamations of conquering kings, at the consecration of King William is further ceremonial evidence in the Carmen (lines 805 and 807) for the marriage in song of religious destiny and military conquest.

In 1066 as in 1895 and today, song is used to inspire those bent on violence with a religious justification for their violent enterprise and a promise of salvation should they die in a holy cause.