News of the surging Severn bore coinciding with the total lunar eclipse in March may have solved a nagging mystery and helped me to prove that Julius Caesar and William the Conqueror both used the same ancient estuarine port to invade England.  As the linked story explains:

It is a special natural phenomenon known as a tidal bore, where high tides create an impressive surge wave.

The Severn's impressive tidal range, the second highest in the world at up to 50ft, combined with its estuary shape creates the ideal conditions for the bore to form.
Water is funnelled into an increasingly narrow channel as the ride rises, and as it travels up the estuary is channelled into an ever-decreasing area, causing the huge waves.
. . .
The bore, one of eight in the UK and around 60 worldwide, was once measured at a height of 9.25ft in October 1966.

Railway engineer Steve King set a world record for riding the bore in 2006 when he surfed the wave for over seven miles for 1 hour and 17 minutes. As a tidal bore surges up a narrowing estuarine channel, it creates a larger, more powerful surge wave against the river's current.  Tidal bores are especially powerful at times of unusually high tides, e.g., at or following the full moon coinciding with the spring or fall seasonal high tides.  Tidal bores are magnified when the channel is near a strait that concentrates tidal force or when the tide is further swelled by wind and storm surge.

It hit me reading about the Severn Bore that the ancient Brede Valley below the Strait of Dover might have had a powerful tidal bore meeting all the above criteria when it was open to the sea, 2000 and 1000 years ago.

And the descriptions of the port from ancient texts may support the identification.

Who can we think of from history who was surprised by the violence of tidal surges in the British port where he had believed his ships secure?  Well, Julius Caesar leaps to mind for one.  He lost his ships to the violence of surge in the port where they anchored in 55 BC on his initial invasion of Britain and again, despite precautions, in 54 BC when he returned to Britain.  His description of the port where his forces landed has never been satisfactorily reconciled with the known coast of Britain. From Elizabethan times the port has been assumed to be Deal or Sandwich.  However, the words Caesar uses to describe the geography of his landing are utterly inconsistent with that part of the coast.

Caesar describes the port in his Commentaries on the Gallic Wars (IV:23) as extending seven miles beyond his overnight mooring and bordered by montibus angustis - narrow heights.  I've bolded the geographic details that describe the port.


Montibus angustis explcitly means high hills narrowing from a base in proportion to height, and so by inference precipitous.  This description makes no sense applied to Deal and Sandwich, neither of which have any cliffs or heights, and doesn't make sense either applied to Dover, where the cliffs are precipitous but bluff.  The description is a perfect match, however, for the steep sandstone ridges to the north and south of the Brede Valley - now the Udimore Ridge from Sedlescombe to Rye and the Icklesham Ridge from Guestling to Winchelsea.  These would have been much higher and steeper 2000 years ago.  It has been suggested that the phrase mare continebatur could be interpreted as describing a port 'hemmed in by cliffs', and that too is a perfect description of the estuarine Brede Valley.  It is unlikely to have been a sensible description of ancient Dover, Deal or Sandwich.

Ex locis superioribus in litus telum adigi posset means that from the heights the defending Britons could cast spears to the shore.  There are no heights at Deal or Sandwich nearer than Dover.  From Dover defenders could cast spears to the shore, but otherwise the description doesn't apply as the port at Dover lacked an offshore mooring like the one Caesar describes and wasn't seven miles deep - milia passuum septem.

While the ships are moored offshore awaiting break of day and a change of tide (as ships would be off the Rye Camber for another 1500 years), Caesar brings all the military commanders to his ship to be briefed by Volusenus on what he has learned.  The next phrase has been variously construed because it contains some difficult conjunctions and passive verbs.  If understood as the words of Volusenus, it might mean:  "He warned that as a rule of military affairs, and especially naval affairs demanded, on a nod they could be taken by a sudden and unstable motion, and all things according to the conditions must be managed by them."  This seems like he might have been warning them that the ships would be siezed by the incoming tide and carried suddenly into the port on an unpredictable flood, so that they must be ready to manage whatever occurred next.

Then too, Caesar lands the fleet aperto ac plano litore - on a flat and open shore.  The heavy transport vessels must beach where the water is waist deep, so that the soldiers have to jump into the water and wade to shore in their heavy armour, carrying spears and swords above them, vulnerable to the almost naked defenders with their spears on the shore.  The Morini-affiliated tribe that lived in the port and other British defenders and the Romans then fight a battle in 55 BC in a place suitable for the use of chariots by the Britons - meaning a broad plain.  That cannot be Dover!  The description is perfect for the broad landing at the end of the Brede Valley near Westfield, where Roman roads would later have a crossroad and likely an ancient market.

Full moons 'at the end of summer' (the nearest Caesar gives for a time) in 55BC could be August 31 at 6:00am or September 29 at 16:47.  Caesar waited until the end of summer to take advantage of the the much higher seasonal tides approaching the autumn equinox, reducing the journey time and making it more likely his heavily laden ships would reach Britian sailing on a single tide with the prevailing southerly wind.  Even so, his horse transports do not successfully cross in 55 BC, having departed from a port below the one from which his two legions launched (probably Etaples, though customarily understood to be Bologne or Wissant).

It is unthinkable that lunar high tides were unknown to Caesar and his naval pilots.  It is easily imaginable, however, that they did not anticipate a tidal bore that strengthened to a mighty surge as the valley narrowed toward the place where they had anchored their heavy transports and pulled the longboats on the strand.

Even though he took greater care he again suffered damage to his fleet, both large anchored ships and smaller beached boats, in 54 BC when storm surge overtook the fleet.  40 of the ships are lost, and the rest of the fleet of 600+ ships sustains heavy damage requiring a long period for repair.  Caesar has the ships brought ashore and secured in a defended camp.

This description pf the storm surge is again consistent with a tidal bore gaining intensity up a narrowing estuarine channel.

As an estuary that narrowed from its mouth between Rye and Winchelsea to its furthest reach at Sedlescombe, the ancient Brede Valley would naturally be prone to tidal bores. 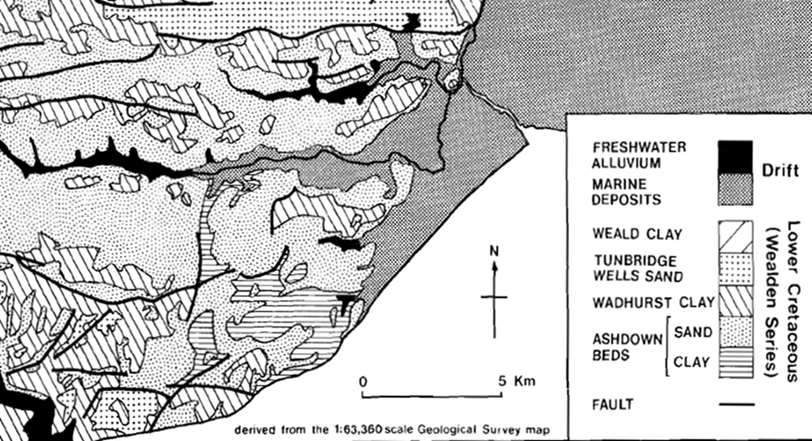 A powerful tidal bore in the estuary would also explain the loss of Old Hastings and/or Old Winchelsea in the 13th century.  According to Willaim Camden, writing in Britannia in the 16th century, in the first-ever topographical survey of Britain: “The tradition is that the old towne of Hastings is swallowed up by the sea."  He also expressed scepticism that Hastings where it now stands was ever a significant port, so possibly different to Hastingeport or Hastingacastre of the old texts.  He points out "The haven, such as it is, being feede but with a poore small rill, is at the south end of the towne.” Back in medieval times, tidal ports were always located on estuarine channels, never exposed positions on the coast.  Camden also commented on the need to labouriously winch fishing boats up from the shore at Hastings in his day, again making it ineligible as a trade port for valuable heavy cargoes like wine, spirits, dyes and oil from the continent.

The Carmen too is explicit about geography for the Norman Conquest.  The fleet lands on a 'peaceful arc of strand' - laeta sinu placido (line 128).   It describes cliffs above a broad valley into which the ships discharge their armies, where the sole surviving Englishman hiding sub rupe marina - under a cliff by the sea - observes the slaughter of the 'tribe of treason' before riding off to warn the king (lines 149 - 155) .

Both Caesar's Commentaries for 55 BC and the Carmen for 1066 describe the navigations as crossing the Channel in the autumn, on a southerly wind by night on a single tide, waiting for the fleet to join up, mooring offshore within sight of land until morning, entering the port on a flowing tide, and landing their fleets on a calm, level arc of strand.  Caesar's fleet advances 7 miles into the port; the Normans advance three hours from 'leaving the sea behind' (lines 123 - 124).  In Caesar's day the coast was defended by tribesmen affiliated with the tribes Caesar sought to subdue across the Channel, then settled with Belgian-Gallic tribes loyal to him, but in 1066 the coast was undefended (line 127).  The Belgian-Gallic settlers' descendents and Anglo-Normans had all been slain or enslaved or joined the rebels in 1052 when the outlawed and exiled Godwin and Harold rebelled against King Edward the Confessor.  In 1066 King Harold had taken the fleet and any coastal guard of his retainers to fight the northern invaders led by King Harald Hardrata of Norway and his brother Tostig Godwinson.

The Norman fleet landed in the Brede River estuary in 1066, the army of more than 10,000 warriors and auxiliaries created a fortified camp there, and that camp - swelled by emigration in the years that followed - became the Novus Burgus of Domesday Book in 1085 - a city for which there was never any royal charter because its initial founding was as a temporary military base.  According to line 597 of the Carmen, the Normans of 1066 called that place Hastinge portus castris - camp at the port of Hastings - which would be Anglicised to either Hastingaport or Hastingacaestre.  Old Hastings was probably lost to the sea in the roaring storm surge of the 13th century, a replay of the violent tidal bores that destroyed Caesar's fleets.  We know the same storms destroyed Old Winchelsea and eventually displaced the shingle on the coast and closed the great port to the sea.  We have regarded the Brede Valley as pastoral ever since.

The more I learn, the more convinced I become that the Brede Valley holds the secrets to the conquests of Britain by the Romans, the Saxons, the Danes and the Normans.