A windy day in Winchelsea!

I was invited back to Winchelsea, Sussex, by the Winchelsea Archaeological Society to give an update on my researches into 1066 geography.  What none of us expected was that Winchelsea would be hit by the full force of Storm Brian, the second named storm of 2017, roaring at us from the south.

The effect of Storm Brian was somewhat comic to the audience, but not so much to me or the curate!  The gale force winds were literally blowing the roof off the church as I made my presentation.  I could see daylight looking upwards, and competed with the howling gale to get my research across.  Just as I was taking questions, four brave men ventured onto the roof above, with the winds still howling.  They started hammering some sort of shelter back onto the structure to preserve the church from the elements.

I know church roof drives are a trope of fundraising in England, but St Thomas's Winchelsea has a clear and present need should you feel inclined to help them out!  St Thomas ranks as the #1 attraction in Winchelsea on Trip Advisor, so if you can visit yourself and make a donation, even better. 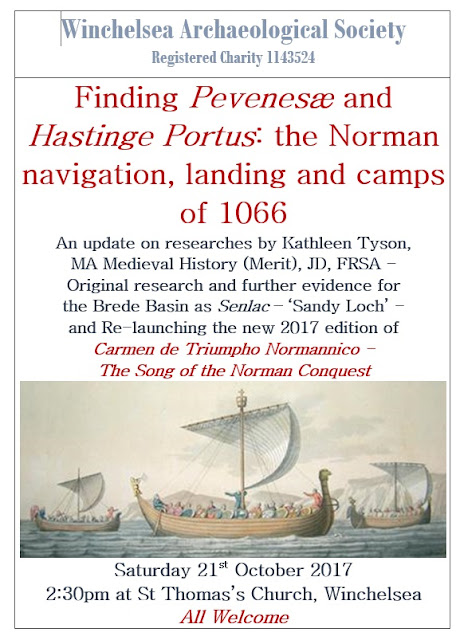 About 30 brave souls had come to St Thomas's Church on the day.  The venue was apt as the church preserves parts of a much grander 14th century church, built in Winchelsea's heyday as the premier wine and oil port on the south coast of England.

Old Winchelsea was a toll cell of Fecamp Abbey, recorded as Wincenesel in a 1028~32 charter of King Cnut.  The clerics of the monastic cell out on a shingle spur collected telonei (thelony) from ships at the anchorage at Lydd (pronounced Lith in Old Norse and Anglo-Saxon).  The monks kept two-thirds and paid one-third to King Cnut to buy his royal protection from the avaricious Earl Godwin.  We know Godwin was a bad-actor in the drama as he was forced to sign 'this is done by my willing consent' instead of his usual Godwin dux at the bottom of the charter.  Old Winchelsea was destroyed by storms in 1250 and 1282, leading to a charter for the new town at Winchelsea on the spur of Iham at the end of the Icklesham ridge.


Lith meant 'arm' or 'limb' or 'estuary of the sea', and fits with the description of Portus Hastingas et Peuenesel from the much earlier 785 charter of King Offa to the Abbey of Saint-Denis in Paris as being above the 'sea-forde'.  Of course, I also think the Brede Basin port was used by the Norman fleet in 1066 for their landings, fortifications and camps, supported by the Carmen's description as 'the land owed to you, stripped of its terrified settlers'.  Godwin had finally seized the port by force in 1052 during his rebellion against King Edward, and Earl Harold refused to hand it back after Godwin's death in 1054 when petitioned by Abbot John of Fecamp.

When I first identified the Brede Basin as the likely port of 1066 way back in 2013 I had never been to Winchelsea and thought I did not know anyone there.  I pinged an email to was@winchelsea.net asking if there was anyone in WAS who could help with the 11th century history of the port.  Surprisingly the response came from someone I had known early in my City career at the Bank of England!  He was as shocked that I had taken an interest in history, as I was to find a friend in Winchelsea.

He invited me to address WAS on my research into the port history and 1066, and that was the start of my career as an historian.  Many of the same people came Saturday.  I am grateful to them all for their encouragement, and especially for their local knowledge.  My big insights from the day included: 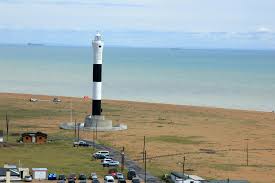 Every time I visit the Brede Basin I discover new things and make new connections.  It's a wonderful place, full of magic.  Visit if you can, and stop by St Thomas's to drop a note in the collection box.