Finding the 1066 Landfall: Pefnesea or Pevenesae at Lydd and Dungeness

On Saturday we made a sort of family pilgrimage to Dungeness Lighthouse.  It was erected in 1960 using several novel principles of engineering and construction innovated by the late Frank Hay.  Frank Hay's son and two adult grandchildren were among our party.  The grandchildren had not been to Dungeness before and they were captivated by the lighthouse scale, scenery, and seeming permanence.


The principal innovation was the use of pre-cast concrete rings, a very new technology in 1960.  These were fabricated in nearby Rye.  The rings were transported to Dungeness, stacked on a foundation on the shoreline, then interlinked by four internal vertical steel cables, tensioned by anchor points either end to hold the lightweight structure intact through all conceivable forces of wind, sea and shifting shingle that might test a lighthouse on the exposed coastal spur.  Today the lighthouse still stands proud, although the coastal shingle has since shifted gradually to leave the lighthouse some hundred metres or so further from the shore. 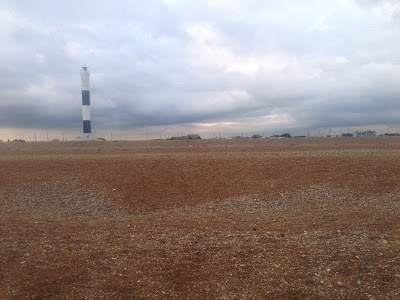 Nothing manmade is permanent in that shifting, liminal landscape and seascape.  The image above was taken from the highwater line on the shore, where it is in 2017.  We know from eyewitnesses that when the lighthouse was erected in 1960 it was sited on the coastal waterline.  The vast shifting arcs of shingle that have accreted to separate the lighthouse and fishermen's cottages from the sea in the very few decades since led me to think again about the mystery of where the 1066 anchorage of Pefnesea/Pevenesae might be found.

Scene 38: 'Herein Duke William with a great fleet is crossing the sea and is coming to Pevenesae.'


Pevenesae was an anchorage reached on a single tide with a south wind, as we know from the detailed imagery of the Bayeux Tapestry and the description of the navigation in lines 100 to 116 of the Carmen de Triumpho Normannico - The Song of the Norman Conquest.


But fearful lest dark night impose losses on your men, and wind roil the sea in contrary gusts, you order the ships to stations so the curved anchor might restrain their sterns.

In the middle of the sea you make a sea-harbour.

You advise the sails be laid down pending the morning ahead in order that your exceedingly weary people might have rest.

The Norman Fleet clearly came to Pevenesae as a well-known anchorage in the seascape, and not a place in the landscape.  In the Tapestry, the ships are under sail, steersman are guiding by the leeboard, lookouts are scanning for defenders on the land, and the oarports on the ships are all closed.  No one steps out of a ship.  These are visual signals to the savvy mariners of the medieval age that the ships are still making progress toward the landfall which is detailed in the next scene.  At both the launch from Baie de Somme at Scene 36 the landfall at Hastinga in Scene 39, the sails have been taken in, the masts are struck, the steersmen guide ships to the strand with poles, and the oarports are meticulously detailed as opened when the bare boats line up on the strand.  In Scene 39 tousers are rolled only to the knee, and horses can walk on the firm strand.  There are no anchors in either scene, although massive anchors are prominent in Scene 6 when Harold lands at Ponthieu.

I was lucky enough to travel to many Nordic capitals while I was translating the Carmen for the first time.  While in Iceland I visited Viking World, where they have a replica, sea-worthy Viking ship.  Being able to actually walk the deck and inspect the craftsmanship was amazing.  The most striking thing for me was the swivelling oarports.  Touching the oarports and seeing how they close for sea travel and open for estuarine raiding by oarsmen changed my understanding of the Bayeux Tapestry.  Once you know about swivelling oarports, you cannot confuse Scene 6 (a coastal landing with anchors and closed oarports) with Scene 36 (an estuarine launch with open oarports) and Scene 39 (an estuarine landing with open oarports). 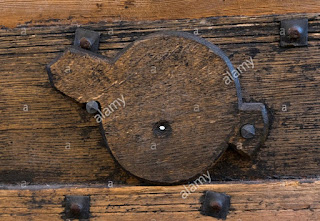 The detail from the Carmen about the 'sea-harbour' is one I am particularly proud of deciphering.  No previous editor has understood the line, and I might have missed its meaning too were it not for my Nordic travels and the scholarship of Chuck Stanton on Norman Naval Operations in the Mediterranean.  He illustrated the sea-harbour formation used by Venetian fleets to secure their warships and horse transports as below.  As soon as I saw the illustration I understood line 116 of the Carmen:  In medio pelagi litus adessus facis.  It had seemed nonsense, but once you have seen the sea-harbour formation it makes perfect sense.  Sterns are linked together so that archers on the bows of warships can defend against attack.  Horse and materiel transports are sheltered within the arc of sterns, safe from attack. 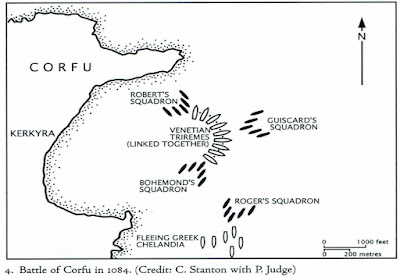 Ignorant modern landlubbers have equated Pevenesae with Pevensey, claiming the Normans landed at the mythical Pevensey Bay (named by Victorian real estate developers), but that is nonsense.  Pevensey did not exist as a named place in 1066.  The modern town was founded by charter of King John in 1207 after the burgesses' old port at portus Peuenesel closed to the sea from shingle drift.  There is no archaeological trace of a port at modern Pevensey, despite extensive exploration.  There is no geologic survey evidence for a navigable basin or channel at Pevensey (the west side of the bay would certainly be unsuitable, shallow, silty salt-marsh).  There was no fresh water, no fuel, no forage for horses, no food to be looted anywhere nearby, and no rational reason for settlement on the barren, sea-sprayed spur leading to the Roman-era fort.  The fort itself has yielded no archaeological evidence of sustained habitation during the Anglo-Saxon era.  Any channel through the Pevensey Levels in 1066 must have been toward the east, leading to the sheltered tidal anchorage between Hooe and Wartling.


The nearest reference to any pre-Conquest site near modern Pevensey is a grant of Caestre near Eastbourne in a 1054 writ of Edward the Confessor.  The writ describes Caestre as having 12 cottages and salt-pan.  Notably there is no mention of a port, mill, market or church, or any other amenity of a town which would have been mentioned as revenue-earners in the writ if they had existed.   The commentary in the linked text speculates Caestre might be Hastings, but all other places in the writ are very close to Eastbourne, implying the abandoned and massive Pevensey Castle, and there was no castle at Hastings before the Norman Conquest.  The only pre-Conquest settlement near modern Hastings was a small Fecamp Abbey cell in Priory Valley to the west, convenient to Hooe.  Beyond Wartling was a tidal salt-marsh that extended more than 22 miles to Pevensey Castle, and more than 20 miles inland into the Weald.  The vast salt-marsh can still be seen on topographic maps, giving an idea of the extent of seascape and salt-marsh when the land was 2 or 3 metres lower. 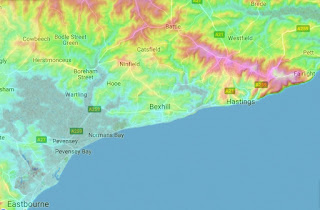 The other recent breakthrough was realising Lydd, the nearest town to Dungeness,  was probably derived as a local placename from the Norse lith and Anglo-Saxon (mostly northern Anglian) Lyð.  Lith meant arm, limb or estuary, but I think it also meant tidal anchorage.  All the places associated with placenames from lith are liminal.  Lydd, Sussex, is on a shingle bar, a natural tidal anchorage in 1066 or thereafter for anchoring or beaching while awaiting the next flowing tide to enter the Rye Camber. 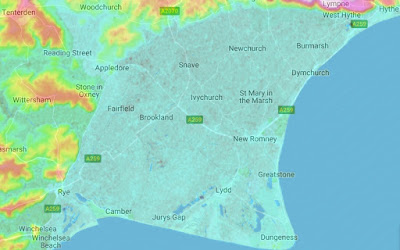 Pevenesae, Pevenesel, Pevenessellum in accounts of the Norman Conquest were all references to a shingle spur or island at the gap leading to the Rye Camber, Hastingaport, Old Romney and other medieval harbours.  In the Anglo-Saxon Chronicle too, all references to Pefenesea and Pevenesea make it clear that it is an anchorage for ships.  Ships shelter there, ships lay to there, ships muster there, ships are attacked and seized by Godwin there.  The only reference which indicates some land feature is in a 1087 entry, long after the Norman Conquest, when there was a castele there.  Castele can mean subsidiary fortlet or cell of an abbey, but it can also mean lighthouse or signal beacon in Old French.  A lighthouse at the anchorage to guide ships from the Gallic coast safely to shelter would make good sense.


In 1066 there would have been another shingle bar where Lydd is now, 'almost at the ness', so Peue (almost) nes (ness) sel (isle) or Peue (almost) nes (ness) sae (waters) would be apt, toponymic placenames well suited to guiding navigation.  The Norman accounts and Bayeux Tapestry all agree and make better sense once you know about liminal anchorages.
The Norman fleet crossed on one tide and anchored at Pevenesae/Peuenesel/Peuenessellum while they rested and awaited the next flowing tide which took them into Hastinge portus, the port of the cape of Hastingas in the Brede Basin.


Now that makes sense!  And I'm grateful to Frank Hay and Dungeness Lighthouse for helping me figure it out.