I have bought another dictionary, perhaps the most wonderful dictionary I will ever own.  It is Nathan Bailey's An Universal Etymological English Dictionary and Interpreter of Hard Words.  Despite the fame of Dr Samuel Johnson and his 1755 adaptation of Bailey's production, Bailey was the first to compile an etymological dictionary of the English language in the form still used today.  Earlier attempts at dictionaries just gave word meanings.  Bailey's dictionary was also the most popular of the 18th century. Bailey innovated many of the forms and practices that Dr Johnson (whose 1755 dictionary was actually the 21st dictionary of the English language) and others emulated. 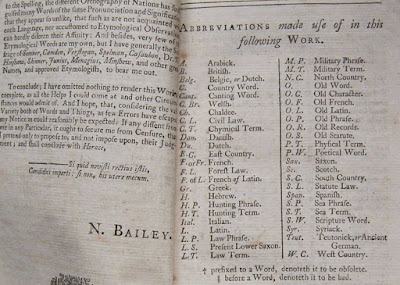 I already value two things about the Bailey Dictionary that make it infinitely superior to Johnson's effort.  The first is that Bailey recognises the etymology of a word when it entered the English language.  For example, he refers to Teutonic or Ancient German, where Johnson misleadingly says German.  There was no Germany until the first Deutsche Bund in 1814, and certainly none in the 5th to 7th centuries when many words came into use in Britain with Saxon emigration.  It is misleading and inaccurate to say words came into English from German.  The loose German confederation that emerged in the 19th century amalgamated many earlier tribes and diverse linguistic traditions.  Bailey recognised that diversity of antiquity and respected it.  Bailey also recognises a lot more scope for Old French, Greek, Hebrew, Arabic, Belgic, Dutch and Syrian, and even has a separate styling for Sea Term to cover nautical dialects common among mariners from India to Eire.


Bailey also includes many words which were considered too common, uncouth or vulgar for inclusion in later dictionaries aimed at schooling the gentry.  Bailey gives words associated with specialist trades, manufacturing, sea-faring, body parts, and even swearing.


I didn't find the first word to come to mind when I checked for completeness, but I did find Shite: to ease Nature, to discharge the Belly.  No entry for shite in Dr Johnson.


When schooling of children became general during the Victorian era, the priggish governors opted to put Dr Johnson in school libraries and classrooms, thereby narrowing the English mind and denying the richness of English linguistic origins.  If schools had stocked Mr Bailey's dictionary rather than Dr Johnson's, then it is likely a lot more English boys and girls would have spent time consulting the dictionary to their betterment.  Kids like looking up rude and interesting words.  Later Victorian toponymists narrowed English place names even further, as Celtic, German and Latin, ignoring the richness of Nathan Bailey's enquiry.  That narrowing of the English mind is regrettable, and has led to a fair amount of misguided history too.


I can give an example of how the narrowing of the English mind rendered history less accurate, and it is the reason I bought the dictionary.  Nathan Bailey is the only source for the phrase "Harold, the last Danish king" of England, in his entry for Battle Abbey.  The Victorians, perhaps to please a very German royal family, altered Harold to Saxon, ignoring his Danish mother, Anglo-Danish father, and other obvious Danish preferences, like slave raiding along the coast in his ships.
Because Harold was born in Sussex, Harold became Saxon.  I suppose the children of British parents building the British Empire who were born in Hong Kong became Chinese, or those born in Bombay became Indian, or those born in Johannesburg became African, right?  Historian Edward A. Freeman was delusional in suggesting Earl Godwin had any loyalty to King Aethelred or his sons, or that the Godwin family identified as anything but Danish.  Godwin fought for Danes, was made an earl among Danes, married the Danish daughter of Viking Thorkell the Tall, and gave all his eleven children Danish names, including Harold.
Godwin's daughter Gytha became Queen Edith when she married King Edward.  After his death when she commissioned the Vita Eadwardi, however, she omitted all discussion of her parents' heritage and ethnicity, even though the purpose of the first half of the book (written before Harold died) was to ennoble her family and justify Harold's seizure of the English crown.  If Harold had any noble Saxon connections, it seems likely she would have wanted this advertised.  So if Gytha the family historian was ashamed of her parents' heritage, then it is all the more likely that there was no noble blood to claim.  Her maternal grandfather was Jarl Thorkell the Tall, famed hero of the Battle of Assendun, her maternal uncle Ulf had married Cnut's sister and been regent of Denmark, her cousin was King Sweyn of Denmark, but she chose not to advertise these connections.  She was similarly silent on her father's heritage.  Arguably if Godwin was the son of Wulfnoth then his treason against King Aethelred, raiding and slaving the coast in 1008 with 20 ships, and burning of 80 kings' ships might not be seen as wholly patriotic.  The evidence for Wulfnoth being the son of Ealdorman Aethelmar of Wessex is very thin, but if he was, he was born of a handfast Danish woman, not a Saxon wife, as Wulfnoth is not a noble Saxon name.


Freeman's history inspired Sir Edward Bulwer Lytton to a more transparent flight of fiction.  Harold the Last of the Saxon Kings may have been read by generations of English schoolchildren, but Sir Edward was as inaccurate and misleading as Mr Freeman in making an 11th century Anglo-Danish earl into a Saxon hero.  Harold and his family slaved Saxons to Danish markets to their great profit.  They would never have identified themselves with the subjugated tribe they exploited.  Harold's standard at the Battle of Hastings was the Dacian wolfskin of a Danish sea-warrior.

Another Dacian wolfskin standard from Trajan's column in Rome paired with the death scene of King Harold Godwinsson in the Bayeux Tapestry.


I've been saying Harold was a Danish king for four years now, and it's nice to find that an English historian agreed with me.  It's a shame minds and dictionaries narrowed so much in the centuries since.


One notable fan of Bailey's Dictionary was Abraham Lincoln.  He kept his copy of Bailey to hand as he was schooling himself in Indiana from at least 1823.  Bailey's dictionary enabled Lincoln to comprehend works that would otherwise have remained beyond his grasp.  Lincoln's skills as a lawyer and orator are probably due to his fondness for reading Bailey's dictionary for pleasure.