I gave myself a full day out in London yesterday.  After a panel retrospective on 2018 at the RSA I ventured to the British Library for the Anglo-Saxon Kingdoms exhibition.  I was irritated by the exhibit narrative from the first display, and remembered why I had found academic history so frustrating when doing my MA at King's College London.  The narrative provided with displays regurgitated so much that is just plain wrong when better narrative would be possible and more interesting.


The very first panel informs the reader that the Angles, Jutes and Saxons emigrated to Britain from the 5th century.  It mentions no indigenous peoples living in Britain before their arrival - no Britons, no Romans, no Celts, Picts or Scots.  It ignores how the newcomers rose to power and seized imperium.  The newcomers just magically come over and suddenly we have Anglo-Saxon England.  As far as we are told there was never any political organisation, no kingdoms, writing nor religion before these emigrations.  Absolute nonsense.  There had been civilisation and kingdoms in Britain from several centuries before the arrival of Caesar, and these kingdoms had laws and religious texts written in Greek and Latin.  They organised, collaborated, fought and shaped Britain long before the 5th and 6th centuries, and should at least merit a mention as setting a context for the newcomers.


The next exhibit was worse.  The big panel says Saint Augustine brought Christian conversion to Britain when he came to the court of King Aethelberht of Kent.  Of course there were Christians in Britain from the earliest apostles, some of whom arrived in Britain before Peter reached Rome.  Gildas and Bede may decry these early bishops and clerics as misguided in clinging to Greek teachings and Greek texts, but they were certainly Christians.  British bishops attended the councils of Arles and Nicea convened by Constantine the Great, the first Christian emperor.  British bishops brought the tenets of the emerging Universal Church back to Britain and Eire and spread them widely along the coasts, if less so into hinterlands.  For that matter King Aethelberht of Kent was raised Christian in the court of King Cheribert of Neustria and was Christian when he married Queen Bertha there.  It was his Christian father-m-law and Nuestrian mercenaries who put him on the throne of Kent.  His Christian father-in-law sent secular clerics, including a bishop, into Kent with the young king and Bertha to exploit his new sub-realm.  In correspondence Pope Gregory writes to Queen Bertha and recognises her as the moving spirit in Christianising Britain.  Being accurate would recognise that Saint Augustine's achievement as an apostolic envoy of the pope was to subordinate the British church to the authority of Roman popes and supress British Hellenic Christianity in favour of Roman orthodoxy.  The fact that we don't have surviving Greek texts doesn't mean they didn't exist, but that they were destroyed wherever they were found.


The exhibits themselves were quite lovely, although again I despaired at the grim dark charcoal walls of the exhibition space.  I was familiar with almost all the manuscripts on display from coursework on the MA, having used many of them as references for my own researches.  The most exciting text for me was the Will of Aethelstan, one of the six older half-Danish sons of King Aethelred.  The 1012 will leaves the sword of King Offa to his brother Edmund Ironsides, later king of London, and the estate at Comtune in Sussex to Godwine Wulfnothsson, later Earl Godwin of Wessex and father of King Harold.  Aethelstan's step-mother Queen Emma and half-siblings Edward, Alfred and Goda are entirely omitted.  The display tag mentions the sword of King Offa, but not that it was given to King Edmund.  It ignores Godwin and others entirely.  The will to me has always held special magic as suggesting so much of the turmoil that would follow between Danes and Saxons and Normans, so I regretted the commentary was so minimal.


The most intriguing artefact was an elaborately carved impress seal for Godwine and Godgytha, with a representation of the couple carved into the handle.  It is possible this was the seal of Earl Godwin, though it says ministri rather than dux on the seal.  Godwin's earliest office after King Cnut was crowned in 1016 was likely as his reeve collecting Danegeld and Heregeld with the newly formed Huscarls.  Being the king's reeve would merit the style ministri.  The commentary tag translated ministri as thegn, but that is inaccurate.  Thegns were demoted by King Cnut as subordinate to earls, with only Huscarls sworn as direct servants of the king.  Godgytha on the seal's obverse could be Godwin's wife, Gytha Thorkellsdottir.  As daughter of Thorkell the Tall, the most glorious of all Vikings, the hero of the Battle of Assendun, and the military mentor of King Cnut, Gytha would be among the most powerful women in Danish-ruled England.  Her sons Swein, Harold, Tostig, and Gyrth all became earls, with Harold becoming king in 1066, and her daughter Gytha became Queen Edith to Edward the Confessor.  Gytha certainly handled business affairs for Earl Godwin, marketing the slaves his ships brought to Winchester back to her native Denmark, and hosting trade delegations from Eire, Normandy, Flanders and Denmark in her home in Winchester. 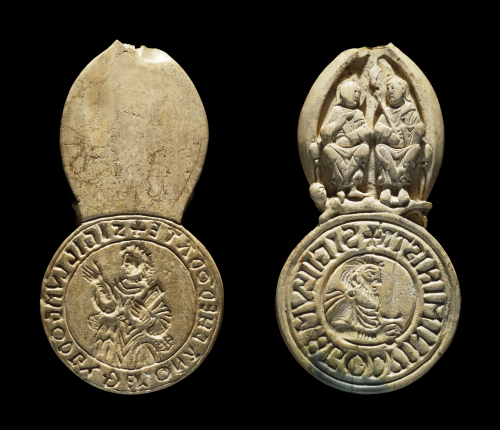 
I wondered contemplating the elegant couple on the seal whether it was a custom for Danish women to take the prenom of their husbands on marriage.  If so, Gytha Thorkellsdottir would become Godgytha on marriage to Godwin about 1021, and Gytha Godwinsdottir would become Eadgytha - Anglicised much later as Queen Edith - on marriage to King Eadward the Confessor in 1045.  It was just an idea, but I'd be grateful to hear from anyone with better knowledge of 11th century Danish naming customs for women.


Despite the irritating nonsense of a few display notes, the exhibition is a marvellous compilation of Anglo-Saxon manuscripts and artefacts and well worth a visit if you're in London.  The exhibit closes 19th February 2019.


Afterwards I walked down through misty streets to the West End and Covent Garden, and then to Leicester Square to join T at the National Portrait Gallery.  By serendipity we happened on the crowd convening in Trafalgar Square for the lighting of the Norwegian fir Christmas Tree given each year by the city of Oslo in gratitude for British support during World War II.  We sang carols and ooooohhhed with the rest of the crowd when the lights were lit on the big tree.  Continuing our walk we carried on through Pall Mall to Victoria and stopped by friends' door to barge in for drinks and take them to curry.  It was about as nice a start to the holiday season in London as anyone could wish.